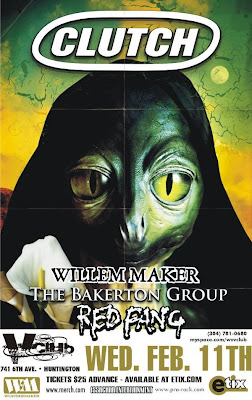 Although Clutch is based in Maryland, they're no strangers to local fans and venues. The band is slated to play the V Club in Huntintgon February 11th, kicking off a near show-per-day mini-tour that runs through February.
The band recently set up their own label, Weathermaker Music, and released their live DVD/CD "Full Fathom Five" in the fall of '08. That was just late last year, but it seems like a long time ago.

Even though this is a rare Wednesday night show, and tickets are $25 in advance, Clutch has too wide of a following for this show to not make the local fire marshal worry; it will be packed. Clutch will bring their side project, The Bakerton Group (which will release "El Rojo" 2.17), Alabama's Willem Maker and Portland, Oregon's Red Fang.
We wouldn't be surprised to see them in some newspaper, in an article about the band coming to town. If you're interested in pre-ordering tickets for the show, click here, or just show up on the 11th.
Posted by WVRockscene!