A few Morgantown area bands are set to release new CDs in the early parts of 2009, and we're lookin' forward to 'em. Roundup? WHOOPESSH!

One Hundred Hurricanes will release their 15-song debut effort “60 Years Under The Stars” Friday, January 30th at 123 Pleasant Street in Morgantown. You can hear some recently uploaded tracks off the new CD on their MySpace profile. The band, with catchy, quirky retro-rock numbers like the opener on the CD, "Duke Hat," may most immediately remind you of The Strokes, maybe. "Be That Way" may evoke At The Drive-In for some reason. The nicely packaged CD was recorded at Mark Poole's Zone 8 Studios, where a lot of bands from up that way seem to go, with impressive results. Check the band out. 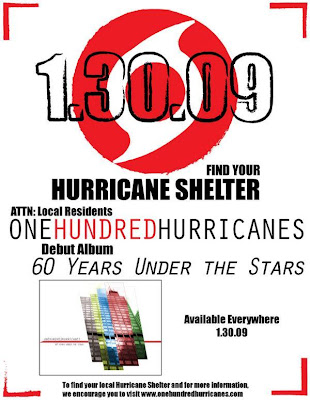 West By God will release their new CD "For Glory or for Flames" February 7th at 123. The band recorded the CD at Zone 8 back in August '08, and is about to get 'em in the mail last we heard. We got hooked up with their first EP and would definitely look forward to hearing the sophomore effort from the Clutch-esque five-piece.

Fairmont/Morgantown area punk band DangerKat is set to release "Dangerkat Collection I: The Search for the Yeti," recorded, yes, at Zone 8 studios, very very soon from what it sounds like on their MySpace blog. Hey, we like punk rock!

And we also hear that our good friends in Thred will be releasing something called “Quadbanger” in the near term future. At least that’s what Thred's artistic genius Brian Pickens, who kindly (and freely) designed the WVRockscene page header you see above, told us.

Look for these CDs soon and look for us to maybe put something together on any combination of these bands and their recording efforts.
Posted by WVRockscene!