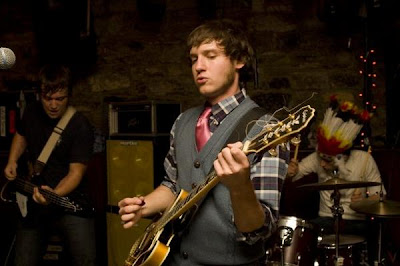 The Demon Beat (above) is one of the many rockin' bands that will play the Huntington Herald-Dispatch Tri-State Music Scene local music showcase show at the V Club next Saturday.

There are shows where you may be able to catch two or three cool area rock bands; not uncommon. Saturday, January 24th, at the V Club in Huntington, more than a dozen local and regional bands will play the Huntington Herald-Dispatch Tri-State Music Scene's local music showcase show. Starting around five in the afternoon and running into the wee hours, the show features some of our personal Huntington faves.

The H-D TSMS blog, up for a few months, is the brainchild of 22-year old Moorefield native and someone no stranger to covering local bands -- writer, photographer, (videographer?) and now blogger Taylor Kuykendall. Pulling his various talents together at the Dispatch, Kuykendall now has a platform to cover what he sees as the best area bands; some more established, and some you may not have heard of.

“My reason for starting the blog was to keep my music skills sharpened, but also to improve the paper based on my skill sets,” Kuykendall said over e-mail.

“Blogging…is an amazing way to throw out new bands. My only real responsibility is to expose people to the band. I don’t have to do much convincing, because I can provide sound clips where the reader can hear the band. I don’t ask them to do much, so the case is pretty simple to make. My job in any case is to bring audiences to bands that deserve it.”

In addition to studying Journalism at Marshall and serving as an intern at the paper, helping cover the local crime beat (which would keep him busy enough in Huntington), he’s now pulled off the Herculean effort of booking a killer show, with a newspaper and a bar collaborating on said show.

“When I got a job at the Herald-Dispatch, I was afraid I would be committed to hard news and features. I was at first, but they let me have more responsibility as I proved I could handle it.” We'll say.

Kuykendall sounded almost as surprised as we are that the show, which, thanks to Route 60 Music will benefit charity, came together so smoothly.

“It was much easier than I ever imagined,” he admitted. “I went to Patrick Guthrie at the V Club first. He was ecstatic. That whole scene at the V is just bubbling with love for local music. Bill Galloway and Patrick were both really supportive and helpful of the whole situation.”

“The Herald-Dispatch was very supportive. Dave [Lavender] helped a lot with suggestions on what I needed to do to go about everything. Ed Dawson, our executive editor, loved the idea. He is a big supporter of arts in the area. I basically told him what I wanted to do and he took care of everything else. The only thing I had to do was schedule and select the bands.”

Kuykendall, who had previously covered local bands as a radio show host at WMUL and in Graffiti Magazine, said his involvement with the blog came about just as smoothly, with some help. “Dave Lavender, who I think is somewhat of a journalistic celebrity around here, really took me in and helped get me into the entertainment reporting side of things.” 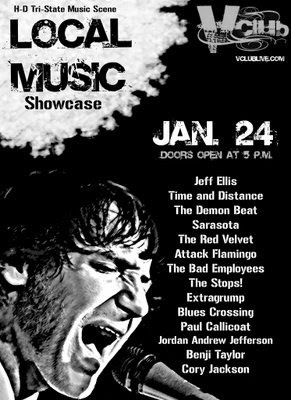 The bands booked to play would arguably rival the best "Loud and Local" second stages. Jeff Ellis, The Red Velvet, Attack Flamingo and Bad Employees -- a few of Huntington’s best area bands, will be joined by The Demon Beat (Shepherdstown), Extragrump (formerly fistfightwithgretchen), a new band from Huntington called Alamo Royale (aka The Stops!) and some other, maybe not-always-heard solo artists, including Red Velvet frontman Jordan Andrew Jefferson, Charleston's Benji Taylor, and Huntington's own Paul Callicoat.

It’s being able to literally showcase these acts at the show and on the blog that appeals to Kuykendall.

“Cory Jackson is one of the guys that most people haven’t heard. He’s a friend of mine that I thinks deserves a little attention, but until now he has only played a few open mic nights. A lot of the acts are established in the area, and they are going to draw a crowd, others however, are smaller groups that I think deserve just as much attention.”

Kuykendall, who admitted to dabbling on guitar, said he appreciates the passion of the bands, what it takes to perform, and the excitement they showed about the show.

“Every band booked is genuine and honest with their songwriting. Some of the groups are pure artists, others are pure rockers and a few are a good blend of the two. There is a lot of real love, talent and passion in this group…Every single one of the artists jumped at the opportunity to help out. A few wanted gas money and a few requested some free pictures from the event, but most just wanted the chance to play in front of a crowd.”

“I have played guitar a little bit and I write songs to impress people every once in a while. I am always admiring people around me who can muster the determination to create something as complex and beautiful as a good song. I would have loved to be a rock star, but I am trying to live the closest thing to it by interviewing people more successful than me.”

Kuykendall rightfully expresses excitement about his H-D blog, and seems to place it in a nice context of the area.

“Well, the blog is definitely going to be gaining steam. I am adding more frequent posts and content…With the economy down, I think it’s important to escape life every once in a while. If I can do that for a few Tri-State citizens before I move on to something else, I have succeeded, even if I never become a rock star.”


--- The H-D Tri-State Music Scene showcase show starts at 5p.m. Saturday, January 24th at the V Club in Huntington. See above flier for band info, cover is $8 at the door and $5 in advance. Click here to see about pre-ordering tickets. Demon Beat pic by Melissa Rogers
Posted by WVRockscene!