First, Morgantown's One Hundred Hurricanes is set to release a new CD soon. They've been working on it here in Charleston and from all accounts it should be done in a few weeks. We've managed to miss them when they've came to the Parrot recently, but we'd look forward to catching these guys out, or hearing their CD. You can find out more on the band at their ReverbNation site. 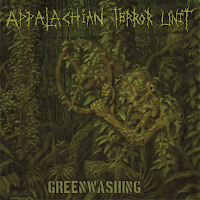 Appalachian Terror Unit, a hardcore crust punk band from Huntington that does a ton of shows all over the country, is set to release ther debut LP "Greenwashing" soon. They're going on a non-stop Midwest tour this month, and they say the CD should be ready for the tour. They've also got quite the political bent; they'll donate a % of tour sales to people arrested protesting the RNC/DNC.

You can download the title track on their MySpace profile. If yer into this kind of hardcore stuff, check 'em out. And check out "Endless Bloodshed" on ATU's profile to rock with us for a sec.

And a cool new band from here in town; The Scrap Iron Pickers. Roadblock teams up with Byzantine drummer Matt Wolfe and John Sizemore on guitar for something that, judging by their song "Hard Drive" is anything but bluegrass. Hey, we dig some bluegrass. Their first show is 9/12 at The Empty Glass; sounds like a promising lineup.
Posted by WVRockscene!