We support people's endeavors to cover local music on the radio. A few items have caught our eye recently as far as broadcasting, and why not comment on them?

First, we've recently got tuned into this new local music show out of Beckley called Neighborhood Watch on 103 CIR. We thought Beckley sucked way harder until we noticed some of the bands they've recently played, including Beckley's own Shawn Benfield and Shepherdstown's resident rockers in The Demon Beat. The show is on Thursday nights if yer down that way.

Up in the Parkersburg area, our friend Todd Burge is doing big things with his songwriter night podcast and radio show on Z106. The shows air Sunday nights from what we've pieced together, and we recently noticed a cool survey-type thing Burge sent to area musicians, with insightful questions on being creative and playing out and stuff. We've got Burge's "Hip About Time" CD and dig what he does; check the links out.

And to much fanfare X106.3's X-Fest 2008 lineup was recently announced. Underwhelmed would best describe our response whenst reading their Loud & Local (Budweiser i.e. import beer) second stage lineup. They've rightfully picked Bud Carroll & the Southern Souls, who we did get to catch at The Empty Glass, and made a stab at reviewing their EP here at the blog.

But we just can't get into the type of bands they book, it seems, for each stage, apart from Carroll. Granted, we guess X106.3 plays these kinds of bands on air, but I know they also play Jeff Ellis and other types of bands. X106.3's Loud & Local program we'd say is the premier local music outlet for WV, and we think there are cooler local bands than what fills out their lineup. They do have a kind of representative lineup from WV, OH, and KY -- their listener base, but whatever.

And let us take the opportunity here to say that Brandon Woolum is one of the coolest nicest guys we've came across in our local music endeavors. He's took the time to help us with pointless shit like -- back when we were starting up on MySpace, he and Paul (Oz) Oslund took the time to tell us how to set up links and codes on the MySpace version of WVRockscene. And he took the time to do a special Q&A with us last year at thegazz.com on the bands that were booked for the L&L stage. 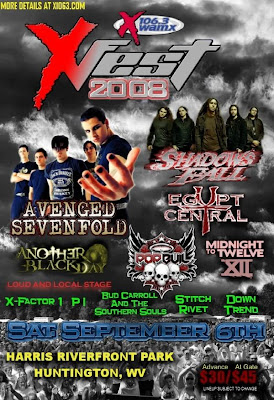 So the question immediately becomes: Ok, WVRockscene, you think you can do a better job picking a Loud & Local second stage? Have at it! We here try, with our favorite Huntington acts...

1. Jeff Ellis -- We know Woolum loves Ellis like we do.

2. The Red Velvet -- One of the most radio ready bands at the moment.

4. Threefold Theory -- If they haven't played X-Fest yet it's a crime.

5. The Dig-Its -- They have a new singer and they are one of our favorites.

Again, nobody cares what we think, we know that. To close this rambling post we'd also like to ask why there's no Charleston radio station putting on something like X-Fest? Rock 105, ZRock, and 102.7 -- do they even have local music programs like Loud & Local? We don't think so. We think this Noizbox reunion show lineup at Coonskin Amphitheater 8.24 is cooler than this year's X-Fest, and it's not $50. But that's just our taste in music, we guess. 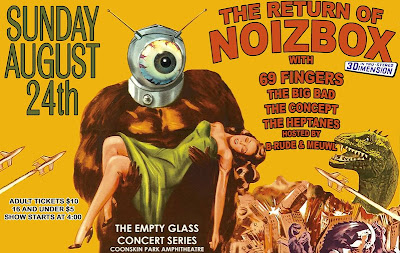 So, by extension, Charleston's local music scene sucks compared to Beckley's. Nice. Oh and by the way we never listen to the radio.
Posted by WVRockscene!