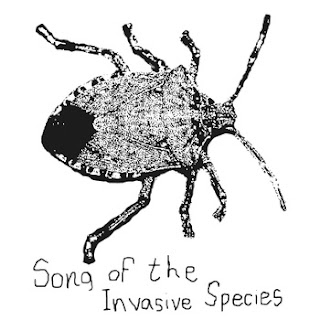 CD: Song of the Invasive Species
ARTIST: The Dreadful Horoscope

What a long, strange, delightful, trip it’s been -- the 40-minute or so long journey that is The Dreadful Horoscope’s CD Song of the Invasive Species.

A review of the 10-song release is timely enough, even though ’twas released back in June. One reason is the very literal invasion, the swarming assault of these stink bugs on the WVRockscene home office. It’s not as bad as last year, where you stopped flinching when they’d land on you, as they approached beard-of-bees like capability. But that’s one reason it’s good we waited so long to post our most favorable review of Jacob Matz’ latest acoustic-based journey.

The second? At the end of the review, dear friends, of a CD that we’ve had for a while here and had thoroughly enjoyed even right after it was uploaded onto bandcamp a few months back.

But talk about keeping Morgantown weird. Experimental. Atmospheric. In parts, pleasingly noisy. An almost directionless but strangely fulfilling trip taken upon with Matz and friends.

Yes, we’re big fans of the BBR-based Dreadful Horoscope. We loved last year’s self-titled release for the same reasons we love this one; more of the same lazy, ethereal acoustic folk output, but with an even bigger, maybe more experimental sound than was found on last year’s release.

Imagine something like Jim Morrison enlisting Pink Floyd’s horn section for a trip out into the Australian outback for some shamanic, definitely spiritual showdown, then coming back to the banks of the Monongahela River to record about it, reading from a few diary entries, and maybe you’re close to The Dreadful Horoscope’s sound.

Matz’ lyrics are a trip enough. Eschatological conflict, or some spiritual persecution, maybe apocalypse, permeates the poetically-put-out-there lyrics; no real choruses or verse-chorus-verse structure for these campfire sing-a-longs with Matz’ nasally, near Frank Black type singing.

But make no mistake, the real treat with The Dreadful Horoscope is the music. Song of the Invasive Species has an even more experimental, richly layered, earthy air accompanying Matz’ own multi-instrumental contributions than last year’s release.

Matz is joined by John Morgan (yes, like it says on the Dreadful Horoscope Facebook page, John Morgan “of Juna fame,”) but if you haven’t checked out even Juna’s most recent release, you might not appreciate Morgan’s own authentically tribal (in parts) sound, and how it would fit right in with what Matz is doing as The Dreadful Horoscope.

Matz and Morgan are joined by Miles Craft for percussion and Jacob Smith, whose dreamy saxophone contributions add so much to the songs.

One great thing about what these guys are doing together, though, is that they’ll do stuff that really aren’t even “songs,” just experimental go-nowhere type noodling (“Introduction of a Species,” “The Witch (like the belly of a fish covered with hair),” and “The Gifts of the West,” with cymbal crashes and trashy snare smashing interspersed with tribal shouting and real-enough sounding screams, are good examples of this). Be it on a Didgeridoo or a Theremin, with the sax, uke, clarinet, piano/organ with “field recordings” and having been “recorded next to the Monongahela River,” Song of the Invasive Species really captures an outdoor, almost new age (not in a bad way at all) type atmosphere. It at least would be great to listen to camping out, getting all neo-Luddite and stuff.

This contrasts to the warm acoustic (almost sunny) sound accompanying a glacially foreboding sense of spiritual crisis -- or something, maybe, but yes, an even dreadful picture painted by Matz lyrically on a few songs. You almost get the sense that the invasive species is not bugs after all.

Matz sings on “The Smell of Cut Up Grass:”


“With your back toward a blanketed past, covered up and warm, and marching toward this monumental future. Carved. Perpetual. Our lives are carved and perpetual.”

And, finishing our lyrical examples, on the country and western-esque “Stamps:”


“Stamps on my brain, but they are fading as time goes on.
So you called me a socialist, but I don’t pray to that god.
There was this long awkward silence before we began to make love.
You forced me to watch, I urged you to listen.
But, I was the queer and you were the christian who left stamps on my brain.”

The seven-minute long “Awful Ink” might be the best example, may best encapsulate, the experimental acoustic bent The Dreadful Horoscope is on. “Fail” has rightly achieved near-cliché played out status recently, but it really is something bands do sometimes as they may attempt to segue or branch off into a more folky, experimental-type acoustic realm that these guys inhabit.

You can definitely say The Dreadful Horoscope is “unplugged,” maybe unhinged, but they pull a hard-to-capture experimental acoustic sound off effortlessly with an even richer ambience than you’d expect at first. Even with all the instruments there’s a coherence to the sound throughout it seems, helping to make it a great record.

Song of the Invasive Species might just be, no, is, a great CD to lose your mind to. Accompanying the CD Matz sent a while back was the negative of a photo of the desert Southwest, some cactus-lined stretch of highway, only adding to the sense of a literal journey. When the CD’s over you really do feel like you’ve been somewhere and back -- kudos to Matz and friends for producing something you can say that about.

The Dreadful Horoscope: “The Smell of Cut Up Grass”

The Dreadful Horoscope - The Smell of Cut Up Grass from Shane Butler on Vimeo.
Posted by WVRockscene!