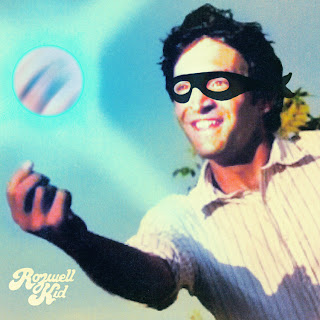 It’s 1994-ever on Jordan Hudkins’ new 10-song eponymous debut as Rozwell Kid. Well, there’s actually eleven songs, if you count the “hidden song” at the end. Sounds like the 90’s to me.

Where once there was Jude Universer, now, there is Rozwell Kid. How or why this happened is some sort of cosmic mystery. Or maybe not, with visions of getting in (albeit wholly figurative) rockets heading to the moon, time machines, UFOs and driving a “Saturn,” appropriately enough, given Hudkins’ new persona, to New Mexico.

Either way, this CD didn’t exactly come out of the blue at this here blog. And let’s not look too much into any interstellar theme: Hudkins’ lyrics are as much about rock and roll staples like chicks (“Rocket,” “My Saturn,” “‘93 Connie and Ronnie,”) and wasting your life being in a band (“Born 2 Drum”) -- all worthwhile at the end of the day -- as they are any grand concept. It’s more of a slacker manifesto than some grungy space opera.

Best known as The Demon Beat’s drummer and an artist in his own right, Hudkins follows up and revamps a few songs (the opener, “Rocket” and “New Mexico”) from his Jude Universer release Lingering Blue on this, one of the more highly anticipated releases of the year here at WVRockscene.

Back when Hudkins was not even 10 years old and Michael Jordan was still busy winning NBA titles and not having Hitler moustaches, Weezer, like they were for many others, were a personal favorite of this blogger. Weezer’s “Blue album” was fuzzy and near-grungy but super-catchy with humorous lyrics (hear “Ace Ventura Pt. 3”).

Hudkins sings upon seeing his future self:


“First thing I saw when I stepped out of the time machine
Was a tiny version of myself, and I was pissed off at me
‘What the hell have you been eating?
Your job is a waste of time
Is it too much to ask
That you get off your ass?’

This future doesn’t look cool to me

Listen to me you little shit it’s easy to quit and hard to commit
And I’m sorry that I’m not what you thought we’d be
Not starring in Ace Ventura Part 3
So you can go to hell, me
Yes you can burn in hell”


After fan-favorite Pinkerton, bassist Matt Sharp left in much acrimony to form the Moog-soaked synth-grunge-type act The Rentals, and Weezer was never the same.

Why does this matter to this review?

Taking in what Hudkins did on the Jude Universer release (a surprise favorite in the WVRockscene “best of” CDs from 2009, for what that is worth, which is not that much) and now following that up with a new persona but similar-but-amped up sound as Rozwell Kid, he seems to straddle that nebulous time period inbetween the “Blue Album” and Pinkerton -- not a bad time, but really just catchy, fun, high energy pop stuff. And still, in parts, like Lingering Blue, like a rarely heard Weezer-Rentals hybrid.

This is the realm that, for me, Hudkins inhabits as Rozwell Kid. That I could be so stoked to hear Hudkins and friends (Dylan Balliett, George Zatezalo, Andrew LaCara and Andy Pickens) as Rozwell Kid, and not at all be disappointed or let down, only further takes me back to compiling the first few releases of the aforementioned DGC bands, when grunge and raw distortion and feedback met synth.

Maybe that flannel Hudkins sported in that great picture of the Demon Beat backstage in Baltimore was nothing more than a thinly veiled nod to this time period.

The songs are even arranged and structured like some of that catchy 90’s stuff; pop type loud-quiet-loud verse-chorus-verse with bouncy, fuzzy bass lines walking you through and holding the songs together in between crashing cymbals, sonically experimental in parts yet with a real, live feel, and oh he was probably just hanging out -- killer solos provided by Hudkins’ Demon Beat band mate Adam Meisterhans.

While his Demon Beat bandmates Meisterhans and Tucker Riggleman have found various levels of side project-type success, most notably and recently in Prison Book Club, but also as Black Fag (where Meisterhans evoked the “Blue album” quite awesomely) and Riggleman as a solo artist, for me, even though there really aren’t any Jude Universer/Rozwell Kid shows to speak of, Hudkins’ music stands out among all output among West Virginia bands for its ability to quite literally transport me back in time.

Black Fag + Jude Universer = Rozwell Kid would be enough to sum up the sound and feel on the songs, maybe. Thumbs up to Brian Spragg and David Klug for the sonic handling.

I can see it now: Hudkins as Rozwell Kid hits it big on West Virginia’s Got Talent, signs a major label deal with NFL agent Drew Rosenhaus representing, only to lose it all via trumped up RIAA lawsuit brought by Rivers Cuomo and Matt Sharp.