WVRockscene gets thankful, gives thanks 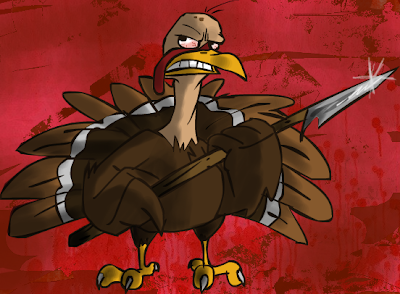 It’s a slow holiday week for us, so why not have the entity known as WVRockscene present a highlight list of things we’ve been thankful for this year?

Internet access -- Duh, we need the internet to have WVRockscene!

Podbean -- Compared to the previous mp3 hosting service we used, this site has been our rock when it comes to uploading and hosting rock music and the occasional poorly recorded interview. Check out the pullout player at the bottom left of the screen and don’t worry about the mp3s working.

Bandcamp pages -- A whole ‘nother platform for bands to get their music to fans and goons like us. Whether it’s J Marinelli, Pat Pat, Spirit Night or Caustic Eye’s page, we’ve got hooked up with more than a few great CDs via Bandcamp pages. It’s a great resource for all involved.

People who do nice things for no real apparent benefit to them -- Basically anyone who’s sent us a CD in the mail this year did it on their own nickel. Sometimes band members are getting lathered up with press-related goings on and include us; we’re flattered always. But sometimes we approach people about music and they are super nice about hooking us up; Eli Pollard sending us a burned copy of J Marinelli’s Pre-Emptive Skankery before it was out, Greg Miller sending us two -- count ‘em: two! -- Whiskey Daredevils CDs this year, and most recently Jude Blevins dropping off the super awesome Satchell shirt.

Entertainment editors at The Charleston Gazette and Huntington Herald-Dispatch -- Your humble narrator is lucky enough to have a kind, receptive outlet to cover bands in these papers. It’s always exciting waiting for articles to be posted online, and it’s always great when the bands are excited about being covered.

Photographers -- Tying in with the previous item, good band pictures make bad articles look good. At least visually. Trust us. Pictures not only are worth a few hundred good words, they can stand the test of time. There’s been a few times this year where we had an article coming down to the wire with no pic and they’ve come through. It’s always the highest priority to make sure the credit goes to where it’s due.

Jimbo Valentine -- You can see our feature chat with Jimbo in our Focus on the Flyers series from last year, but like photographers (which he is a pretty good one at that) what Jimbo does making visually stunning flyers with his awesome art is as important as photographers or writers to the Huntington scene. It just takes a second to see who’s playing, and he’s done a great job for a while now helping to get the word out about shows.

Justin Johnson -- The last but definitely not the least when it comes to things we’re thankful for. At one point Johnson covered the Huntington scene for the Herald-Dispatch, now, his Aural History of 1318 4th Avenue rolls back the clock to the 90’s. His knowledge of the Huntington scene and passion for writing about it and reliving it has been great to read (and hear). It’s been great to click on WVRockscene and see something new that we didn’t even know was going to be up, realize it was his work as an invited guest blogger, and instantly know it was going to be killer. It’s made visiting WVRockscene way more exciting in 2010.
Posted by WVRockscene!