The return of The New Duncan Imperials 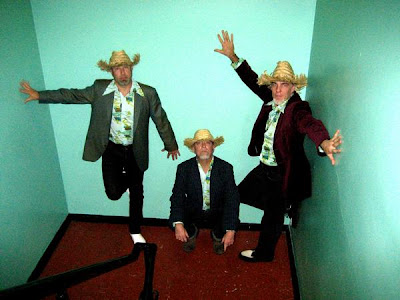 
Chicago’s New Duncan Imperials, rockin’ for 20 years at this point, return to West Virginia this weekend for a pair of killer shows in Huntington and Charleston.

Absolutely jaw-dropping shows packed full of rock, enough to get NDI’s Pigtail Dick simultaneously excited and fondly reminiscent of the years gone by rocking West Virginia fans in Charleston and Huntington, and, the band he’s been a part of since 1989.

“This is already a pretty big tour. You chicken-scratchers wear us out,” Pigtail said of the pair of shows booked.

While it’s been a while since the band came to town, they haven’t just been sitting around getting old -- they released End of Phase One late last year and jammed some release shows for that. Skipper and Goodtime are also in a Chicago-area band called The Goldstars, from what we can piece together.

Pigtail admitted that the secret of NDI’s songwriting process hasn‘t changed much over the years.

“First of all, we don’t write songs. We steal them and rename them…We ran out of subject matter decades ago. Most people didn’t notice.”

One part about the short tour that will definitely suck, Pigtail said, is having to endure the “farts, B.O., dentures, piles, hammertoes, smegma, athlete’s foot, hairpieces, hangnails, snotrockets, scabies, bitchin’ and moanin’, halitosis -- and that’s just Skipper” on the long drive down.

And all kidding aside, even though it’s just a weekend trip to West Virginia for a few shows, Pigtail said fun will ensue and those expecting the Jagermeister to be flowing will not be disappointed. “I loooove Jagermeister…We do still have a butt-load of Jager lighters somewhere,” Pigtail said of NDI’s longtime sponsor and cause of his “snapshot“ memory of past shows.

And the party favorites and/or props? “Just the rock salt and spider cannon. And Goodtime might have a hand buzzer.”

And looking back after 20 years together, Pigtail said he still loves his NDI bandmates.

“My love for the other two idiots is as strong as it ever was,” Pigtail said of his NDI bandmates Skipper and Goodtime. “If I had to go to jail overnight for stealing Christmas ornaments off of suburban lawns again with anyone on Earth, it would be them.”