To help celebrate their one-year anniversary, PawnShop Skateboards owner Brian Carr wanted to do something big. In the year since he started PawnShop out of an actual pawn shop, Pawn Max in Chesapeake, Carr, an old-school skater himself, has introduced a skate team, their own line of decks and merch, a skate park, held several lock-ins, and this Saturday, will hold the “King of the Hills” skate contest, featuring over 40 local and out-of-state skaters.

For Carr, it was a no-brainer to bring a contest this size to town.

“I wanted to throw an event like this annually to get West Virginia on the skateboarding map,” Carr said.

“I originally had planned it to be open only to West Virginia residents, but too many emails came in from people in the region and some states farther away to not let them come. So it is now open to whomever that wants to come. We have guys coming from Ohio, Maryland, Florida, and New York that I know of.”

At of the start of the week, over four dozen contestants had already pre-registered, but Carr expects more. “I imagine most of the contestants will register the day of the competition. Looking to have a pretty large turnout.”

For a small store, now with its own skatepark headquarters, PawnShop has taken on a bit of a cross-country fan base, and its most recently added skate team member, young Anthony Rifici from New York City, will be attending the contest Saturday afternoon.

“We are flying him in for the contest this weekend,” Carr said.

PawnShop has recently set up what they’re calling PawnShop TV, which will simulcast the event Saturday via the web.

“We are totally stoked to have this up and running. I just had a guy call me from L.A. asking about details for the webcast; he and some friends are interested in watching it since they couldn’t be here. We are also recording weekly montages of trick tips, how-to’s, and various comedic stuff to add to the page weekly to keep everyone entertained.”

So, from NYC to L.A., PawnShop has been getting noticed, and Carr said their success can be chalked up to good old fashioned West Virginia hard work.

“The team has been practicing up indoors at our park all winter. We will be dropping a PawnShop video sometime after summer. We will be working hard all spring and summer on that.”

Hard work and fun. Carr said the lock-ins have been just that.

“Lock-ins are the bread and butter for any skate park,” he said. “You usually make half to all your rent/mortgage from one of them. We’ve had three so far; they can be hectic at times but definitely worth it. We usually throw mini contests during the night for the kids, that keeps them excited and awake. I don’t know how they can skate from dusk to dawn, I wish I had that energy.”

A particular skate park from Baltimore had just contacted Carr to give kudos to what they’re doing.

“I received a call from the owner of Charm City skate park in Baltimore yesterday. He said he had a group of guys talking about us in his park and wanted to call me. He said they were telling him how cool our deck graphics were and how good our team is. He said he checked out some video we had on YouTube and he wanted to call to tell us what a good job we’re doing, especially for West Virginia. I thought that was really cool and it made my day!”

Carr said the help the sponsors had given so far have really helped make the contest big.

“There will be clothing by Murder One and Vox Shoes. Eastern Skateboard Supply is supplying us with the 1st-3rd place trophy decks.” Oh, and there is the $800 in prize money and PawnShop merch, plus, a killer first place prize, Carr said.

“World famous skateboard artist and Ravenswood native Don Pendleton has made us a First Place art piece for the winner of the advanced division. The art is amazing and is a true one of a kind trophy for the winner. Don is the artist for the number one skateboard company, Element. He also worked for Alien Workshop for many years. We are stoked to have his artwork and interest for this contest.” (see art below) 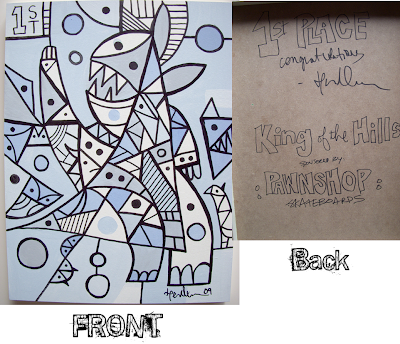 Putting the big picture of their success together, Carr put things in perspective.

“In these economic times it is really tough to do anything with business. For some reason everything is falling into place for us with this and we keep getting bigger and better everyday. It’s all about good vibes with me, and I base a lot of my decisions on that alone. Go with the flow.

A lot is planned for 2009 for us and I couldn’t be any more excited.”
Posted by WVRockscene!

Nice, thanks for the plug guys. At the top it said 40 people attending, should be more around 400! See everyone saturday!!