Best. CD release video. Ever. John and Andy of Bad Employees here not only remind you about this weekend's release show for their eight-song debut effort Looking For Werk, they provide video evidence that the Huntington-based electro-rock duo really are bad employees, literally.

There's both of them consuming liquor, apparently getting trashed, and Andy is sitting around with no pants on, all whilst on the job. Oh and they sound like little girls.

You'll probably see this on WSAZ.

Bad Employees' version of electronic rock should be duly noted, and hopefully they'll be able to live this video down and sell a lot of CDs at the show, which will have The Demon Beat and The Red Velvet opening up?! 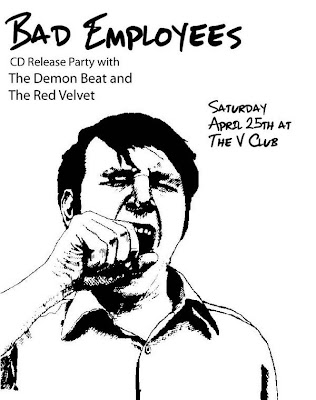 Sounds like a winner to us, you can hear their tunes online, so check out Bad Employees. And as far as we're concerned, that WSAZ plug counts as an ad, so $50.
Posted by WVRockscene!