An Interview With a Gentleman 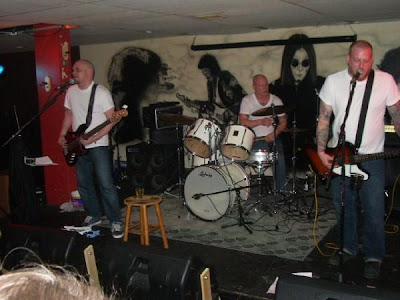 Thee Drunken Gentlemen, one of Charleston’s newest (and reputedly best dressed) bands, it would come as no surprise, formed “over a couple of mixed drinks,” drummer Brian Holstine admitted over email. Now, after getting a few shows under their belt, the Gentlemen have seemed to have hit their stride.

“The shows are getting better each time,” Holstine said of the handful of shows the band's played so far.

After playing their first show at the Empty Glass’ Halloween Hootenanny, the band played the Parrot late last month and recently traveled out to Shamrock’s in Huntington for a show with The Big Bad, with whom the “Gentlemen” will rock the Blue Parrot Friday night.

Thee Drunken Gentlemen are no strangers to either the local scene (having played in, among other bands, The Pistol Whippers, Rose City, and The Black Knots) or Capitol Street. Holstine admitted that the band practices at an undisclosed location maybe not too far from the Parrot.

Compared to most bands these days, the Gentlemen have it backwards; the band has played more shows than they have songs on MySpace. But Holstine said the band plans to record with Greg Hunt “very soon” and that, if you’re looking to compare the Gentlemen with any of the other bands they‘ve been in:

“The best analogy I can give is this: Being a Drunken Gentlemen is like a MANICORN: half man, half Unicorn. A mythical beast that can’t be seen because it doesn’t exist, except to those people who choose to BELIEVE.”