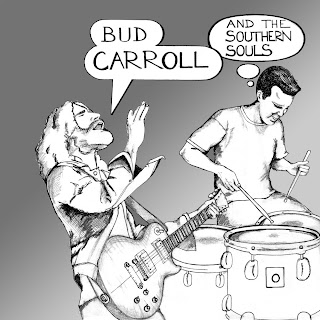 On their new EP Bud Carroll & the Southern Souls pull together seven songs of highly charged rump shakin' southern rock, blues, and soul, with a little reggae and some country and western thrown in at the end. Carroll hasn't exactly snuck up on anybody with his talent (having been in a relatively successful band) but after catching this three-piece live and hearing the CD, we were doubly impressed.

"Hell Raisin' Kind" kicks the CD off with a swaggering nod to the ol' WV and the effects the water and/or dusk might have on said hell raisin'. Like most of the songs, there are cool solos and nice tempo changes in the song. Having grown up rockin' out The Black Crowes, I can easily get into what Carroll and crew (Jimmy Lykens and Steve Barker) are going for; it's like Dr. Mindbender cloned all the talent of the Robinson brothers into one diminutive stature in the form of Carroll, who coincidentally enough looks like Chris Robinson, or, depending on your perspective, Jesus.

The high-energy southern rock standard "Time Don't Wait Around" is pretty much our favorite track; all the ingredients for a great story are here -- summers spent "runnin' with the dead end crowd," and a deal going bad and red & blue lights. Carroll finds himself thrown in jail, "lookin' for Jesus through a gridiron view," and espousing the golden rule.

"Stand Up And Be Counted" is a genre-skipping call to arms, mixing mellow reggae/dancehall verses with powerful organ-soaked rock choruses. Choppy organ over dub bass and Carroll's riffage is a tantalizing taste of a style that you won't hear much in the WV. Carroll's lyrics border on the radical, as he sings emotively "There is no revolution in our hearts anymore/Everybody's fighting for something, but what are we fighting for?" One of the best lines on the CD:

"When the hour of judgment places its hand on your shoulder, do not step aside/until you can stand up tall and speak out loud, do not ever be satisfied"

This song is really the jewel of the CD, but one drawback -- don't get used to hearing the organ and any layered guitar in the live act -- they're only a three-piece. Unless Carroll secretly has four arms or something, they'll have more of a stripped-down sound than what you hear on the CD, but that's cool.

"It's Been A Minute" is a somber, dreamy lovelorn ditty that, with its clear bluesy riffage to open, at first reminds me of an old Pearl Jam song. Carroll sings "It only takes a minute for a love to go astray" over cool organ.

"I Don't Believe You" has been an anti-authority favorite of ours for a while now. With "Stand Up" it forms a kind of bookend of the most high-minded idealism Carroll offers, as he opines "Don't let anybody tell you, that theirs is the only way/If anybody tries to sell you the truth, just stand right up and say I don't believe you," as they roll into the chorus. Very cool solo and bridge on this bluesy rock number.

The first few bars of "When It All Hits You" at first reminded me of a song off the movie Goodfellas or something. But it grew on us as we listened to it "over and over" again, thinking about how things may have been different when we were younger.

The CD closes with "If You Don't Want Me," a bluesy country western number that, in a pinch, Carroll and the Fraternal Order of the Souls could play in case they were ever playing in place of the real Good Ole Boys from Nashville.

Throughout the CD, Carroll's talent for musicianship and songwriting are on display. This is a good start for these guys, and yeah, our only thing is that we'd like to see the band with a keyboard player for their live act; the songs on this CD are way deeper than what you'd hear live.

But we're reviewing the CD, not the live act. Carroll is obviously hugely talented and we'll be interested in what he and the Souls do from this point on.
Posted by WVRockscene!