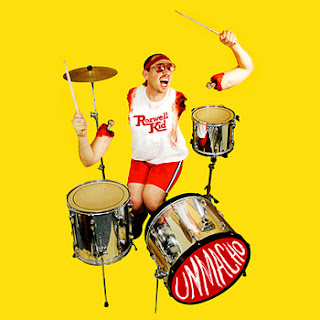 
Never considered yourself a van man? Get ready to reassess your life situation.

Not only do you have Hudkins, Meisterhans, and LaCara (remember The Resonators?) but a short, star-studded, red carpet lineup of area musicians (Brian Spragg, Ryan Hizer, Bud Carroll, Dylan Balliett) appear on Unmacho, making it, as far as local releases go, pretty darn studly.

From the cacophonous jam at the intro of “Bonehead” (“Oh wow, oh wow/I really fucked up now,” Hudkins sings) through the first single and band’s super-charged anthem “Van Man,” to the shredding outro on “Rozwell Man,” (“Get in the van. I don’t have a plan,” Hudkins sings repeatedly) Unmacho is a delightful romp indeed.

Standout tracks include “Lipstick,” “Gumshoe,” and the swaggering “Afterparty,” (based on actual events?) you should definitely check out those if you’re reading this and never listened to RK.

It seemed silly to think a few years ago that of the handful of promising acts birthed out of Shepherdstown, RK would be or could be where it is today. Hudkins, with help from his friends now in Rozwell Kid, have emerged as more than just a drummer’s side project. Now, these dudes have fans and online stalkers all their own.

Where The Rozwell Kid LP may have, for some, fondly evoked The Blue Album, maybe Unmacho is like Pinkerton-- a better band, bigger guitars and killer solos (hear the title track,) better backing vocals/harmonies, and just a better, live energy captured on a better record. A more experimental bent is on display, from the noise jams to reverse cymbals to synth-type hits and other studio tom foolery. Kudos, again, to Dave Klug in Pittsburgh for his studio efforts.

It’s exciting to see how far Hudkins has taken Rozwell Kid, looking back on it from the Jude Universer days. As he and his band approach Rozwell manhood, it’s commendable that Hudkins, now, along with his friends, on a record so highly anticipated, did not disappoint.