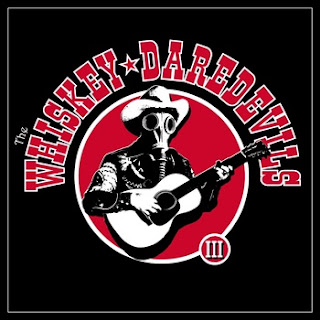 Cleveland's resident cowpunks, the Whiskey Daredevils, return with ten new songs worth of "no frills rock n' roll" on III, ironically the band's eighth release (the first with new bassist Sugar Wildman) and arguably their best to date.

Since welcoming ultra-badass lead guitarist Gary Siperko on, before Introducing the Whiskey Daredevils, the Daredevils have continued to rapidly congeal its own lovelorn, maybe drug-fueled but definitely super fun version of rockabilly. Singer Greg Miller and drummer Leo Love continue to move the band forward, as they did in the 90's with The Cowslingers, which later begat the Daredevils.

"Swim The Lake of Fire" is maybe the hardest rockin' Daredevils song yet. "Corina" is to III what "Ida Jane" was to the Greatest Hits CD. Seems like so many years have past just since that release, but just highlights how the band has progressed through alternately distorted & twangy garage rock, through a more country flavor (Golden Age of Country Punk) on the last couple releases.

"Never Again" is an old school sounding Daredevils ballad that fans will come to love.

Whether you're traveling Route 66, living some sketchy life, falling in love with women you really shouldn't, or singing along with the band at the Empty Glass, the Daredevils are always a good time. This really could be their best CD.