This is not funny: The Demon Beat slay on new split release 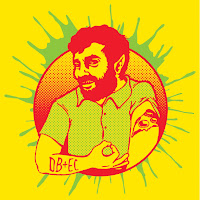 Following The Demon Beat closely ever since Tucker Riggleman sent us a copy of Heavy Nasty out of the blue, it’s been super neat to note any and all changes as it relates to songwriting or production. As they’ve moved from the debut, through the self-titled EP, Shit We’re 23, 1956, and most recently, Bullshit Walks, they’ve maybe taken a slightly more bluesy bent and incorporated it into their version of plug-in-and-go garage rock.

One neat thing about the band is that they’ve put music out on a few split releases, allowing fans to get something of a fix in between the more proper, full-length releases. If you were, like us, lucky enough to snag a physical copy of their Caustic Eye split with Bud Carroll & the Southern Souls, or just listen to that and their 2011 Antler Tapes split with The Shackletons, you know that the splits are both something for you, the listener, and, a chance for the band to get songs out.

So it was simultaneously exciting and not a surprise that The Demon Beat would team up with their Harrisonburg, Virginia-based friends in Elephant Child to put out a split 7” on Funny/Not Funny Records.

The distortion, the feedback, the raw, desperate energy and almost bootleg feel of the production on the previously unreleased “Teenage Wasteland” and the fuzzy, pummeling charm of the alternate version of “Change The Subject” (heard on the Antler Tapes split) make this a whole ‘nother Demon Beat split worth having, and the hot, live feel of the production is great to hear.

The Demon Beat have always benefited by being able to have singer-guitarist Adam Meisterhans record DIY, and from mixing to mastering to getting any and all songs out to their fans, the production has never left anything to be desired, but it is refreshing to hear something like this.

Elephant Child’s six-minute jam “Under The Bridge pt. 2” buttresses the shorter Demon Beat songs and ties the two bands together nicely in some sonic sense. If you haven’t got into these dudes yet, now’s the time.

Plus, Jordan Hudkins’ cover rendition of Dave Bello will no doubt make this split a collector’s item. If you pre-order the split (limited to 300) on the Funny/Not Funny site, you get an immediate download of it, and that ain’t bad.


Elephant Child: “Under The Bridge pt. 2”