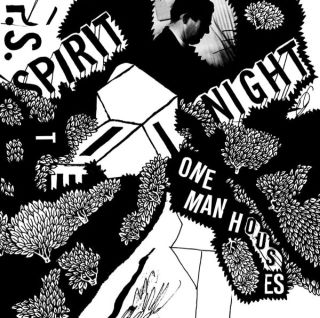 Dylan Balliett never ceases to surprise and impress the highly esteemed/regarded editorial staff here at WVRockscene. Ever since we were introduced to Spirit Night quite literally out of the blue back in 2010, finding out about What We Will Be pretty much with everyone else, we fell in love with the songs and sound Balliett quite literally brought out of his bedroom with friend Pete Wilmoth.

From his bedroom, now relocated to Brooklyn, Balliett -- via Shepherdstown, Morgantown and Pittsburgh -- brings his buddies Wilmoth, Ryan Hizer, and Dave Bello back for One Man Houses, the third proper Spirit Night release and follow-up to last year’s Normal EP. But if you expect any of the dreamy, echo-soaked acoustic-based stuff found on the aforementioned records, yes, there’s that (“Everywhere I’ve Gone” is a good example) but dear readers, you are in for quite the surprise.

You may find yourself cussing with excitement when you first hear the plug-in-and-go punk rock and indie sound of “Goodbye Jones,” “Kerouac,” and “Grasshoppers,” (which we made the mistake of listening to preemptively, spoiling the surprise of the new sound) complete with fuzzy bass (via Hizer) and crashing hard rock cymbals. Something like ‘Daaaamn, this is Spirit Night?!’

There’s also a jangly 80’s college radio rock tone and edge on some of the songs, like “Summer Clothes,” like this could fit into that era and sound, maybe pre-Green R.E.M. or something, fronted by someone who sounds like Elvis Costello?

More great backing vocals and harmonies back up Balliett’s alternately sullen or gutteral, shrieking vocals. One of the great things about Balliett’s material is really the visceral, raw emotion laid out in the lyrics. Themes, like those found on previous Spirit Night tunes, include lost or misplaced friendship(s), moving/leaving (all the more appropriate since Balliett really has moved), growing up, and, yes, jerking off instead of falling in love. But the early childhood trauma and murderous rage explored and described on the six-minute long “The Last Time” is really something that we’ll leave up to the listener to discern.

And let’s not call this stuff lo-fi anymore. The subtle childish laughter and wind on “The Last Time,” adds ambience, and random (panned?) percussion found and added to maybe the most awesome song we’ve heard in a long time, “Rubberneck,” (written by Balliett friend and longtime cohort Dave Bello) is a real treat for the listener. Sure, Balliett writes cool songs with great lyrics, but it’s those little things that make the songs cool. And don’t let us not say something else about “Rubberneck,” if anyone cares: this is a completely badass, hit song if ever there was one, as Balliett boldly belts out the chorus:


“You can read my numbers
If you deal me out
A fresh deck.
Spell out my accident
If you stare me down
And rubberneck.”

This is the standout track on the record. It is indeed way more killer than it appears just reading it as text.

So, if you were mad that Normal was just an EP and not a full-length, One Man Houses, even though barely half an hour in length, with nine songs, more than makes up for it. Thumbs up here to Dave Klug for mixing and mastering duties, and to Balliett and friends for pulling this off. If you thought you had it kind of figured out what Spirit Night will be, you may have thought wrong.


Related: Wanna bone up on past mediocre WVRockscene posts on Spirit Night? Start yer boning with part one of our Q&A w/Balliett from July 2010...
Posted by WVRockscene!