CD Review: "At Least I Can Still Smoke In My Car" 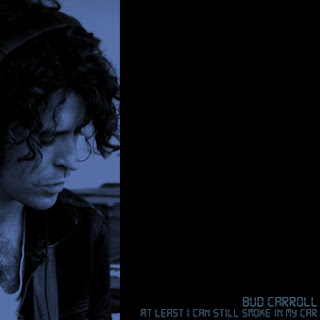 CD: At Least I Can Still Smoke In My Car
ARTIST: Bud Carroll

We ended 2011 heaping praise on a great record that had been released for free, so it only makes sense that we’d start 2012 doing the same thing.

It’s been a while since we last heard from Huntington’s Bud Carroll. Sure, the 29-year old (widely considered West Virginia’s most badass guitarist) multi-instrumentalist has been staying busy, either in AC30, lending his own formidable talents to other acts, or helping bands record at his Trackside Studios.

The neat thing about At Least I Can Still Smoke In My Car, Carroll’s new 12-song release is that in some regards it ties into and partially anchors itself to what we heard on Wasted Words and Best Intentions, but also jumps off into something approaching Brit rock/British Invasion type organs, bells and tones (“Heard This One Before”) in parts, and still sounds familiar to what Carroll’s been doing more recently in AC30.

Two years in the making, it would be interesting to know how and when these tracks kind of came together, as Carroll left his Southern Souls days behind him, still contributing to AC30, but also forging a new, not really new, just solo (in name) musical identity. This is an exciting phenomena to witness; it seems like every time you see Carroll covered in the past, there’s always couching of what he did before: when he started the Southern Souls, it was the (of course, rightful) obligatory mention of American Minor, now with the solo stuff, will we constantly compare what Carroll does to AC30 or the Southern Souls? Maybe.

But yeah, long story short: if you liked the Southern Souls, there’s some more straight ahead hard chargin’ rock (“There Someday,” “I Just Wanted You To Know”) with more bluesy, soulful, lovelorn jams. And whatever band he’s in, know this: it’s gonna rock.

Oh there’s a good reason why you may hear some nods to the Southern Souls on a few of the songs on the record: there are three Souls songs on it. Carroll is joined by Jimmy Lykens, Steve Barker and Jon Cavendish on “I’m No Stranger,” “Thinking Only of You,” and “Honorable Mention.” And there are the frequent lyrical references to “nowhere towns” and “wasted words and best intentions,” infrequent winks and nods to his not-too distant musical past.

But looking at things from the outside, you can almost kind of feel bad for Carroll. Like so many artists, he seems to be his own worst critic, talking about his own obsessive compulsive tendencies in the studio. Regardless of what we say here, it’s safe to assume Carroll knows he’s got something good with this batch of songs.

And regardless of Carroll’s seemingly immense talent(s), the one thing that kind of endears you to his songs is not only his dreamy singing, it’s that Carroll is basically writing love songs here, and he hasn’t exactly been winning. Standing astride whatever genre he wants, in parts there’s a kind of R&B vibe in some of these songs, fitting right in with Carroll’s own pop sensibilities, with all the help of so many people, Carroll has indeed, no surprise here, made a great record.

Standout tracks for us include the aforementioned “There Someday,” the dreamy, yet entirely broken-hearted (with cool organ and bells) “She Doesn’t Live Here Anymore,” “I Just Wanted You To Know,” and “We’ll Be Together Again,” which closes the CD out quite nicely.

Self-produced over two years by “Edward Money” (haha, am I right?) with engineering help from his Trackside cohorts James Barker and Ryan Weaver, with Eddie Ashworth and Max Nolte (who, along with Adam Harris, garnered executive producer credits) sitting in, and with guest vocal appearances from Sasha Colette and John Lancaster -- among other guests -- At Least I Can Still Smoke In My Car really is a CD worth paying for.

“We’ll Be Together Again” Live at Trackside