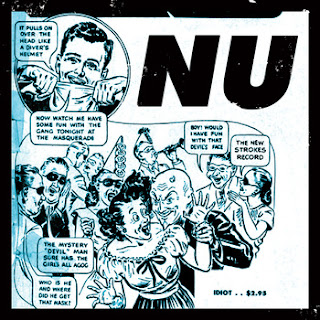 It doesn’t get much more plug-in-and-go than The New Strokes Record by NU. “Written and recorded in minutes,” as it says on their bandcamp page, this latest killer side project and collaboration between The Demon Beat’s Adam Meisterhans and Tucker Riggleman, with Prison Book Club drummer Andrew Ford, only further cements these guys as pre-eminent West Virginia rockers, whatever band they’re in.

Yeah you can’t say Meisterhans and Riggleman ever got the memo that side projects are supposed to suck. While it’s not like they spent too much time thinking about the songs (the 10 songs average two minutes in length -- now that’s pretty punk) on The New Strokes Record, these three dudes capture a raw, abrasive garage rock sound (circa the 1970’s) and punk rock attitude that a lot of bands would do well to emulate.

Favorite tracks include, firstly, “Can’t Party,” “When I (get some)” and “Rescue You” -- but pretty much all of the songs run together in a sonically coherent fashion, and form a pretty great record. Don’t blink or step out of the room though: you’ll miss it.

But seriously, as you may have heard The Demon Beat approach something like The Stooges in the past, (think “This Is No Fun” off Shit We’re 23) and wish they’d explore that kind of tendency, flush that out, this is the record they never released. But now they have, as NU.

Pretty much all of the songs are catchy as hell, uptempo, with driving guitar, fuzzy, walking bass lines, Meisterhans’ near-patented, gnarly shouting and soulful voice ran through layers of reverb and echo all the whilst continuing his lyrical themes of losing in love -- nothing more straight ahead rock and roll than this has come across the desk of the WVRockscene home office this year.

Recorded (like everything else they do) in total DIY fashion by Meisterhans, with album art from Demon Beat drummer Jordan Hudkins, The New Strokes Record is both a step back and two thumbs up for rock and roll from these dudes.

After the “written and recorded in minutes,” liner note on NU’s bandcamp page, it says simply: “Turn that shit up.” Nothing better or more profound could be said here. Turn that shit up indeed.

Could you imagine hearing this, not having heard of The Demon Beat or any of the assorted side projects, each of which is indeed quite awesome? This would be your favorite “NU” band. Haha we’re here all week!

--- NU plays its debut show Thursday night at the Blue Moon Saloon (200 E. High St.) out in Shepherdstown with Sundown and Masquerade Manifesto.