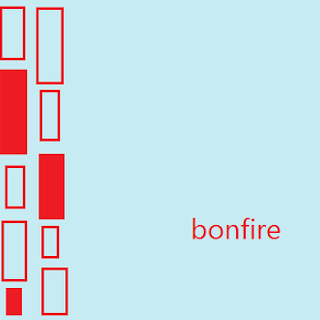 It will come as no surprise to the readers of this blog that sometimes, bands that sound good live don’t capture that energy on a recording. And conversely, a band can have a great CD but just can’t pull it off live.

This is said here because most of what we’ve heard from the Morgantown-area “cupcakewave” four-piece Bonfire has been recorded live. From live youtube clips with varying degrees of audio quality to the exclusive WVRockscene ghettotech recording of Bonfire’s hour-long set at WVU’s Gluck Theater way back in April, they quickly became a favorite and something you would frequently hear around the WVRockscene home office.

Recording live performances off college radio shows is not something we do often -- in fact, it had never been done before Bonfire played that night. But since being introduced to the band by interviewing Zach Francis for the MAYSP benefit show at 123 Pleasant Street in September of last year, for Bonfire’s first show out, maybe only Dream The Electric Sleep has been listened to more than that live performance by Bonfire; we wanted to have that performance recorded just to document the event, as it were, and if anyone else heard it, all the better.

It must be noted that their debut seven-song release S/T is received by this reviewer with a bit of a bittersweet flavor before even hearing it; the band has apparently recently undergone a lineup change and will have The Emergency’s Kevin Post replacing Liz Toler on drums, and Rich Johnson replaces Amanda Burris on bass. The pair of Chris Quattro and Jodi Hollingshead are still fronting the group, just with a little less estrogen.

Back to Bonfire’s sound -- “cupcakewave,” really means fun, catchy pop-infused indie rock with jangly & fuzzy guitars with Moog and organ-backed atmospherics and minimalist drums and bass. Inspired heavily by acts like Henry’s Dress and The Aislers set, Bonfire is kind of a shoegaze meets 60’s rock vibe, with some hard charging, uptempo numbers thrown in, combined with the split vocals and loud/soft dynamic provided by Hollingshead (she can sing!) and Quattro, listening to Bonfire gives this reviewer the feeling of holding hands, bouncing heads back from side to side with the music, spinning around in circles, and falling to the ground laughing before getting into Bonfire’s version of The Mystery Machine to head to the show.

So yeah, a cool band with a cool, unique sound and vibe. I sound like that blonde girl on the Certain-Dri commercials: “Cool!”

But seriously, first hearing S/T it seemed the energy that was heard on the Morgantown Sound show might have been missing; maybe it was the lush, echo soaked, almost too-dreamy vocals. I am not an engineer and don’t record bands, obviously. The band sounds rockin enough on personal favorites like “Calendar Days,” “Song 1,” “Boy of Big Thoughts” and the galloping “Surprise, Surprise,” but between recording and mastering that live energy may have been diminished, if only slightly.

If this was a CD that we’d come across out of the blue, not having heard Bonfire live, it would still be a rockin CD, it would just be interesting to see how we felt having the whole thing being reversed; first heard on CD, then heard live.

And listen, honestly, it seemed like there may have been one or two parts in that live show where Bonfire didn’t exactly nail every song to a T (the band, in its original incarnation, remember, played its first show in September, remember when we talked about that earlier in the review?) but even with a missed chord or botched vocal harmony, this reviewer would still rather listen to Bonfire’s songs with the rare, slight live blemishes, than most other bands.

And that’s another thing -- S/T is too dang short! Just seven songs equaling less than a half hour? The band played for an hour on U92, maybe 13 or 14 songs?

But either way, after getting past the differences between Bonfire’s live sound versus what comes out of a studio it is quite literally all good. Would we recommend paying $5 US dollars for S/T? Yes.

And heck, you don’t have to listen to one or the other -- you can listen to both! Then you can nitpick and debate endlessly and needlessly which you might like better, making yourself sound like a jerk. Do not let us ruin this band for you. Regardless which you do like better, at the end of it all you just might find yourself bobbing your head from side to side, totally digging this band.