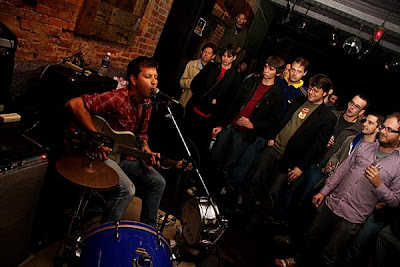 J Marinelli returns to Morgantown to help close out 2008 with holiday shows at 213 Green Street Saturday and a New Year's Eve show at 123 Pleasant Street. It's been only a few months since he and his angry one-man band left Magic Town for Lexington, Kentucky. Since then, he's returned for the 123 anniversary show and was honored by a whole slew of Morgantown musicians on the "Morgantown Does Marinelli" compilation.

Marinelli said over e-mail that he's settled in and Lexington is treating him well. "I'm teaching English at the University of Kentucky, and playing some good shows. Kind of like what I did in Morgantown, but with different scenery. Plus, one thing I noticed about Lexington (and most of Kentucky, for that matter) is that, like Canada, everyone is very, very kind."

For the most part, Marinelli said he and his one-man act have been well-received at Lexington-area shows. "It has varied, but for the most part people -- especially other musicians -- have been very kind and enthusiastic."

When asked about "the Lexington scene" and any cool bands and venues, Marinelli dropped more names than we could shorten, so we reposted it below:

Venues:
"The Dame (which is essentially Lexington's 123 Pleasant Street), Cultural Preservation Research (a DIY spot that has shows five or six nights out of the week), Lower 48 (a new basement club), Al's Bar (is kind of like a pub -- very good food as well -- which focuses more on roots music like alt-country, bluegrass, and rockabilly), and Brooklyn Pizza (a pizza joint upstairs from Lower 48 that has all-ages punk shows -- awesome). There are also house shows on a regular basis."

Bands:
"Apples In Stereo (who more or less live in Lexington now, which is awesome because they've been a Marinelli favorite for more than a decade now), Tight Leather, Very Emergency, Infected, The Loaded Nuns, Idaho, Alaska, The Teenagers Responsible, Attempt, Hair Police, All-American Werewolves, Cadaver In Drag, Big Fresh, Killer Meteor, and many many more... all awesome."

"There's also a VERY strong hip-hop scene: Cunninglinguists (you might want to check on the spelling of that), Devine Cerama, JustMe, etc."

"I should also mention WRFL (88.1 -- www.wrfl.fm), Radio Free Lexington -- a radio station that is on par with East Orange, New Jersey's legendary WFMU. And I'm not just saying that because they put "Keep It Fake" into rotation either."

"Lastly, there are some great record stores as well: the amazing CD Central (ask the guys in Fox Japan about that place), POPS Resale (used everything -- miles of vinyl), and The Album (all hip-hop, very underground)."

Marinelli will definitely be staying busy over the holidays, as he is set for a steady string of important rock-related dates. Saturday is the show at Green St. with Slate Dump and Rifle Camp; Sunday, he travels to D.C. for a show at The Black Cat with Stewart Lupton and George Karos (Marinelli was recently favorably blurbed in the Washington Post); Monday, he'll head into Paul Cogle's Echoes recording studio in Falling Waters (listed at 9 a.m. sharp on his MySpace page) to re-record "Pre-Emptive Skankery," the follow-up to "Keep It Fake."

"I've recorded two different versions of that record and I'm satisfied with neither of them...We'll see if the third time truly is a charm." We'll also note real fast here that the "Stone Age Kicks, Volume I" is available now on cassette, and Marinelli said that Volume II will be out next year.

Later Monday night he'll rock The Blue Moon Cafe in Shepherdstown with The Bloody Nines, and will head back to Morgantown, take Tuesday off, most likely, and play the 123 NYE show Wednesday night with One Hundred Hurricanes and Lake and Ocean.

Marinelli said he was looking forward to seeing people at the shows and during the holidays, and admitted that he was flattered that everyone had came together on the "Morgantown Does Marinelli" compilation.

"Being presented with that collection truly was my "George Bailey Moment." If you don't know what I'm talking about then you should probably watch more TV around this time of year."