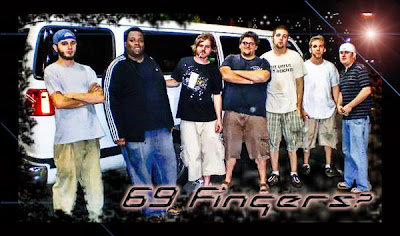 Orlando (via Charleston) ska band 69 Fingers returns to town this Christmas for two special holiday shows with their friends in The Concept. They’ll play the Brickhouse this Saturday and throw their fourth annual Christmas party at the Glass next Thursday, after opening some presents from Santa, maybe.

Recently, a few members of the band had things put in perspective; their front man (guitarist/singer Steve Osborne), bassist (Brian Hitchcock), and drummer (Lucas Scarpelli) were recently involved in a pretty bad car wreck down in Florida.

“As of right now, I can’t even hold a drumstick,” Scarpelli said.

“I got it the worst after flying through the back seat and f’n up my left hand and nearly ripping my ear off but other than that, I walked away from the accident. Also in the van was Steve, Steve’s brother, Hitch, and our friend Andrew. Just to be clear, we were sitting at a stop light. Wrong place at the wrong time.”

The band, all Capital High alums (except for the sax player, Mason Acomb), with their punk rock (and fellow Capital) friends in The Concept will look to catch up on the good times, like they had when The Concept went to Florida for shows with the band.

“It was good times, like always,” Scarpelli said. “They’ve been down a couple times and each time they’re here, we play a couple shows in different cities like Orlando, Daytona, and Sarasota,” he added.

It’s the close friendship between the two CHS punk bands that has led to a collaboration on the punk rock epic “The Decline” by NOFX.

“It’s definitely been an idea and we have played through it a few times,” Scarpelli said. “I’m sure when we do play it live, there will be people who will love it. It’s an awesome 18-minute song.”

But intra-band collaboration on punk rock classics isn’t the only thing that goes down when 69 Fingers and The Concept team up.

Aside from tying one on, 69 Fingers has been busy with new material, Scarpelli said. “We’ve got enough new material to make our next album and can’t wait to unleash it to the world. It’s just getting the money to do it is going to take time.”

Scarpelli, the only original member of 69 Fingers left, admitted that he wasn’t sure the ska band could survive in Charleston. “We moved to Florida to keep the band going. I feel that if we had stayed in Charleston, we’d probably not exist to this day.”

“The band has been together for eleven years now. The only original member is me. I could speak for the rest of the band when I say 69 Fingers means more to us than anything right now.”

--- 69 Fingers, The Concept, The Big Bad, and Down Goes Frazier play The Brickhouse in St. Albans Saturday at 5 p.m. The Brickhouse is located at 52 Olde Main Plaza, it's an all-ages show, of course, and cover is $7
Posted by WVRockscene!