A visit with Vincent Renfield 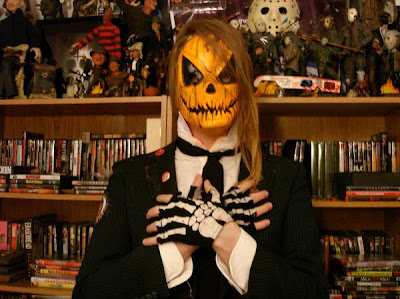 We caught up with Renfields frontman Vincent Renfield (above) over e-mail after their show at Paradox Rift with The Concept, opening for Michale Graves. Below is an excerpt of a brief back-and-forth...

"Just saw an amazing French horror film called Inside!!! You have to check it out man!!!!! The most brutal film! Ha!

Lots of band news -- most importantly we are not breaking up, somehow that is a rumor that has been going around. We are parting ways with a few members; our bassist and organ player played their last show with us on the 18th. It was one of those situations where we had to choose between keeping friends in the band and progressing the way we wanted to. We have a new organ player lined up and are still looking for a bassist who fits our style a little better in terms of picking and vocal style.

We actually have an entire album completed but plan on re-recording the bass and keys when everything is sorted out, so it's on hold for the moment. We are going back into the studio to re-record all of the songs from "The Night They Came Home!" We have already done so with "Prom Night" and "Machete a Go-Go"

I think it's time for the Renfields to bring things up a notch. I think our our first show back will be in July, until then Herbert and I are doing a three man side project called The Jasons with the intent of bringing back that too tough to die Ramones style of punk rock: leather jackets, snotty vocals, stupid lyrics, all with a horror theme of course HA!.

Our first show is at the Concept's CD release party on May 31st. We're going to release a 5-song EP at that show but it will be free as will all of our releases with this band. It's more about fun and so we don't want to turn it into a business.

Anyway, thanks for keeping up with us! I really appreciate everything you've done to get our name out there!"
Posted by WVRockscene!