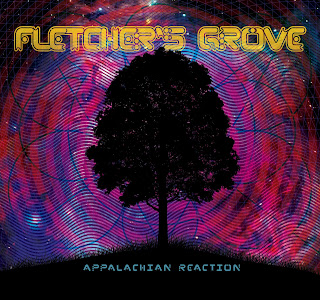 Here at rockscene we have a healthy affection for jam bands and festivals. Not an unhealthy obsession, like our hatred of Charleston Daily Mail editorials, but a real soft spot exists for the vibes and seemingly enhanced connectivity between the fans and bands.

Morgantown jam band Fletcher’s Grove, a staple on said festival circuit, on its 10-song sophomore full-length Appalachian Reaction, presents a nice genre-hopping example of why we, and so many others, dig these kinda bands.

The album, the follow-up to 2009’s All the Way Home, and described by singer and rhythm guitarist Ryan Krofcheck in a recent interview with The Huntington Herald-Dispatch as “A.D.H.D.” and “…very ‘A’ side ‘B’ side,” is indeed a veritable smorgasbord of genres; from funk to folk, jazz, rock, and maybe a hint of bluegrass, the band (Krofcheck, Matt Marion, Wes Hager, Taylor Pratt, and Evan Lintz) unveils five new grooves in addition to hosting last summer’s Pepperoni Pizza EP on the second half of the record.

By this point you may be asking yourself ‘Could that be the biggest run-on sentence ever?’ And, ‘How does WVRockscene know what someone said in a phone interview with a newspaper, for an article that hasn’t ran yet? Are they friends with Piers Morgan or something?’

Yes to the former, and no to the latter.

Standout tracks, for us, include the ode to the Appalachian coal miner, “Faces of the Mine,” the soulful jam “Grapevine,” and “Pepperoni Pizza,” which has lead guitarist Hager absolutely shredding; FYI, he’s a badass. Throughout the record the talent and musicianship of each member is on display. Kudos to Tommy Bailey at Bebop Studios for capturing the rich sonic range of the band.

But it’s no wonder that so many people seem to love these guys. Whether it’s at their home away from home at 123 Pleasant Street, any number of festivals, or, The V Club Saturday, Fletcher’s Grove is definitely a trip.


--- Fletcher’s Grove plays The V Club in Huntington Saturday with InFormation. $10 cover gets you a copy of Appalachian Reaction.
Posted by WVRockscene!