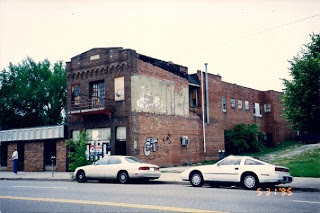 Longtime readers and/or browsers of WVRockscene will of course remember fondly Justin Johnson's 1318 4th Ave. series from a few years ago. Focusing on the 90's Gumby's/Drop Shop days and the bands that came through, Johnson diligently documented those days, a delight for anyone who was there at some point.

Well, Justin just launched his own blog dedicated to "Embracing The Eyesore" and it's definitely something you should get keen to.

Johnson has been catching readers up on the beginning of Gumby's in 1990 and the bands and has been tying things up catching people up on Chum members John Lancaster and Chris Tackett. It was so great to have him doing "1318" for rockscene and we're stoked to see him kick this thing off.

It's even more fitting that Johnson does this now: Herald-Dispatch reporter and friend of those days Bryan Chambers tweeted recently he's working on a story for this weekend about a construction project that will see the building demolished. (correction: 'twas another eyesore Chambers meant! whew! confirm information!)
Posted by WVRockscene!