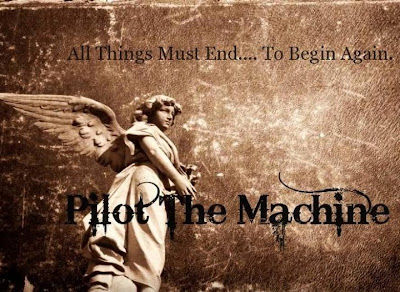 Recently, Mike Ferrell, bassist for the newly formed Huntington band Pilot the Machine, introduced us to his band online, so we thought it was more than appropriate to catch up with him for a Q&A in advance of their debut show tonight at Shamrocks.

WVRockscene: You guys have all been in other bands that achieved some level of success, how does having honed your chops so to say in your previous bands help give you a head start, even though you’re a relatively new band?

Mike Ferrell: Well from my personal standpoint I have learned a lot about the music industry in general, some good things and a lot of bad things...LOL. I have always been a hard worker and shameless self promoter in bands I’ve been in and all of us being in previous bands we feel we have all paid our dues, so I don’t buy into the fact that every new project you’re in, you have to go through this painful pay-your-dues mentality that the music industry throws at you.

I’ve made a lot of good contacts in the business with stints in previous bands in Florida mostly when I was in Spun. We recorded our debut CD at Paramount Studios in L.A. with Barry Conley producing (Chili Peppers, Sugar Ray, L7) so in that aspect I got to see first hand how some of the top producers work and what all is involved. Also got to see the bad side of things as we had a crooked manager who liked to steal from us which eventually led to our breakup, so you live and learn I guess.

I filled in on bass for Crossbreed for a brief time when they fired Charlie Parker (previous bassist on Synthetic Division - Artemis/Sony) and although my wife and I had just had a baby and couldn’t commit to a full-time gig with them, I learned a lot about the record industry and touring -- most of them not pretty LOL, and a lot of pressure to produce results.

Moving back here from that scene not long ago was really eye opening. I want to help create a better and thriving scene like it was back in the days of Chum and even Guru Lovechild and such, where people actually came out to shows, etc. (side note - I grew up and been good friends with Chris [Tackett] and have known John [Lancaster] and Mac [Walker] since they were like 14 years old, LOL, glad they’re making a little comeback.)

It just seems like the bands around here always want to trash each other or compete against each other instead of helping each other and working together to make this scene great once again. The talent is here, with a lot of great bands, but just hard to get everyone to get along, lol. That’s how it was on the Florida scene; everyone helped each other out and no one said or put down other bands. I honestly never heard or seen anything like that. That is one big reason their scene thrives like it does: it’s not just all talent, etc.

We have good enough and great talent here that’s not the problem at all -- it’s getting more people interested in coming out to shows, which will lead to more clubs opening because they would then have the support and which will lead more bands forming or relocating to this area, etc. It’s like a windfall effect, but it starts with bands helping each other and supporting one another.

The other members have all been in successful local bands as well, and so once again even though we are new to the scene as this band we are all seasoned overall, so to speak. Sorry for the ramble, just want this scene to be the best it can be! That’s why I’m so grateful for people like you that give it their all to make this scene the best it can be...and the club owners for stepping up to the plate and keeping live music in their clubs and giving bands like us a chance to do what we love to do!!!

-----
rockscene: How and when did you guys meet/form and coalesce around a sound?

Ferrell: We’ve actually only been together going on roughly 6 months. I met [singer] Scott [Ryan] about a year ago through Band Mix I believe and we started working on a project similar to this one but it fell through and he reformed The Apology, and I stepped in on bass, but then eventually that folded and we were luckily enough to have met the other members through friends and various show we had done with them in the past...so it all just kinda came together...we started jamming and basically had 10 songs written in a few months and transformed from there.

-----
rockscene: In your ReverbNation bio you talk about trying or wanting to dispel stereotypical attitudes when it comes to the music and/or bands coming out of the Tri-State area in general, and West Virginia specifically; do you think these kinds of attitudes or stereotypes from out-of-state sources hold area bands back?

Ferrell: Well honestly I think it does to some extent, I mean some bands can pull it off by playing to that mentality. We want to be taken serious, and sometimes people that live in bigger cities don’t respect that because of the mindset they have of bands from West Virginia or Kentucky.

I think this area has some super talented bands that I would put up against the best bands in any city in America, but somehow the industry as a whole doesn’t give these bands the respect that they deserve. They think that because you live in New York City or L.A. that you’re great.

Well we have great bands here as well! Hate to go back to Chum, but I mean they were one of the most underrated bands ever. A lot to do with them being from West Virginia in my opinion. Same with Bobaflex, Split Nixon, Karma To Burn -- the list goes on and on; great bands, and all deserve better than what they are getting respect-wise from the so-called industry.

-----
rockscene: You’ve got these new songs you recorded with Barry Smith, who more recently worked with John Lancaster on Phantom Moon, how excited are you for people to hear those and what is up with getting a full-length debut out?

Ferrell: Barry’s a great engineer and friend. I’ve known Barry, gosh probably 18 or more years. Awesome to work with and I have so much respect for him as a musician as well. We recorded three previous songs in another studio and ended up not really being happy with their turnout and sound.

Barry was able to bring out our sound and was able to have us step up to another level. We’ll be going back to him in the very near future again for sure. Once again, although we are still in the early stages of this band (especially writing) we all feel our best material is yet to come. We just wanted to get a couple songs recorded and out to see if we could generate some interest. We want to write about four or five more additional songs to choose from, and then we will probably go in with Barry and do a full-length release. Hopefully over the winter at the latest.

-----
rockscene: You’re playing Shamrocks tonight, -- between the debut, new songs, and just being a new band, it’s got to be an exciting time for you guys right?

Ferrell: We’re super stoked to be playing Shamrocks with Unload as they make their return to the scene after a little hiatus. Shamrocks will rock tonight for sure. Hope everyone reading this will come check it out and hang out with us and Unload...we promise a great show and a fun time!!!