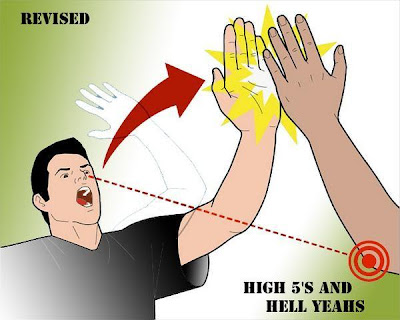 Naming a band is one of the more interesting discussions musicians will have, and deciding to change your band’s name isn’t something to be entered into lightly.

“…there’s already a major labeled group with the same name. Also, Revisionists refer to those who “deny” the holocaust. Damage control on that is paramount, lol.”

Yeah, well we’ll say it’s time for a name change, then. Good thing they didn’t name themselves Al Kayda, or try to go to Europe as The Revisionists.

The High 5’s came to Charleston this past weekend to record with one of Bud Carroll’s Southern Souls, Jon Cavendish, recording a few songs in his Bassmint studios.

“Recording was a total fucking blast,” frontman Nate Shahan said. “…and despite some technical difficulties that always seem to pop up, we managed to bust out four songs, which we plan to release as our debut EP, sometime in late August or early September -- if all goes as planned!”

Shahan said the High 5's were pleased as punch about the sessions and what Cavendish did for them in the studio as engineer and producer.

“He did an amazing job, and was truly helpful in making our recordings sound as raw as we wanted it to sound. We re-recorded one of our tunes that we have a super-shitty recording of (“Denim Disaster“) and three newer tunes that we decided had to be unleashed onto the West Virginia music scene -- “Life Obscene,” “4’s and 8’s,” and “C.E. Overlords.”

There’s a personal connection between Cavendish and the High 5’s, too, Persinger explained.

“I grew up with Jon and learned a few instruments while hanging out at his house way back in the day.”

Shahan said that the EP at this point is still untitled, but they'll release it at 123 Pleasant Street in Morgantown and sell it for cheap off their site.

And, there exists the possibility of a split release with some unnamed rocker friends of the Hell Yeahs.

“Not giving out the name of the band as of now, but they fucking rule!” Shahan said. Who'd have thought that a guy in a band named the High 5's would leave us hanging there, but we'll look forward to hearing more on the split.

So even though the name has changed, these four dudes are still putting out the punk rock. Hell yeah.

--- check out pics of the High 5's Bassmint sessions on their MySpace
Posted by WVRockscene!